Why Zeolite from Australia? 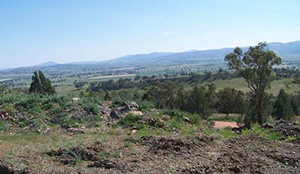 We only use zeolite mined within Australia from an unusually pure source of the mineral. The deposit is situated in a pristine rural location and was only discovered and geologically mapped in 2001. The deposit is over 330 million years old and has been covered over and undisturbed for all of that time until now.

The view across the valley from the mine showing the pristine location of the mine and how much the old volcanoes have been worn away. The pink colour of the road in the foreground is from the zeolite tailings used to maintain the road. This hill top was once a brackish lake into which the volcanic ash fell. Over the millions of years it has been covered over and uplifted preserving
the pure nature of the zeolite deposit. 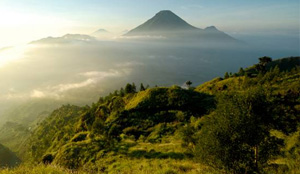 An example of what the area may have looked like some 330 million years ago.

Normally, naturally occurring zeolites are rarely pure and are nearly always contaminated to varying degrees by clays and other minerals such as gypsum, various soils, gravels, quartz and mica.

A North American zeolite deposit showing the various layers of clays and other material embedded within it. This deposit is believed to be between 30-50 million years old. This zeolite is fairly soft and crumbles easily.

There are very few deposits in the world that have remained unpolluted. The Australian deposit comes from an area that has little or no airborne or water pollution to contaminate it. It appears to have been laid down in one long, continuing eruption as it has virtually no other foreign materials (such as those shown in the photo immediately above) within it. That is why this zeolite is recognised as one of the world's purist and therefore one of the most effective. Its natural cation exchange capacity when mined is 147 which is one of the highest in the world today.

We only use this zeolite mined from this one source within Australia. As one can see [photo on right] it is uniform in appearance has the texture of hard rock and has a distinct pink appearance.

This clinoptilolite zeolite is recognised as being ‘non hazardous’ and does not require any special handling instructions. A safety and toxicology report is available from us on this web site, see <safety/toxicology>.

Go back to FAQ's

Go back to previous page