The zeolite used in our products is composed of approximately 85% clinoptilolite [cli-nop-til-o-lite] and 15% mordenite [mor-den-ite] with small traces of other minerals <chemical analysis>. It can be described as a hydrated alkali alumino silicate and is one of the most abundant forms in the zeolite family. The precise composition of clinoptilolite is subject to a degree of variation. Although a naturally occurring mineral, its approximate empirical formula is (Ca, Fe, K, Mg, Na)3-6Si30Al6O72.24H2O. The Chemical Abstracts Service (CAS) number for clinoptilolite is 12173-10-3.

The formulae and the resultant structure are extremely important. Notice that clinoptilolite is primarily composed of oxygen [O72], silicon [Si30], water [24H2O] and aluminium [Al6] (in that order). The other minerals in far lesser quantities are iron, sodium, calcium, potassium and magnesium <chemical analysis>.

What makes zeolite so unique is its rigid structure which is arranged in an ordered, matrix configuration resembling a bee’s honeycomb. The microscopic chambers, channels, cavities, pores, cells, or cages (we call them cages as they trap molecules), which form this intricate honeycomb structure, although mostly uniform in shape are of different sizes.

As the zeolites are microporous [a material containing pores with diameters less than 2 nanometres] crystalline solids they have a well-defined geometric framework (honeycombs) such as the two examples shown below.

A defining feature of all zeolites is that they are insoluble and are composed of an extremely stable combination of silicon, oxygen and aluminium in their frameworks. Most zeolites are made up of 4-connected networks of atoms, called a tetrahedron. A tetrahedron is formed with a silicon atom in the middle and oxygen atoms at the corners [see single blue triangle below]. This inbuilt stable framework is why no free aluminium exists in the zeolite we use and the aluminium comprises just 12% of the zeolite.

These tetrahedra (plural) can then be link together by their corners (see two triangles below) to form a variety of beautiful structures [see the cage]. The framework structure may contain the linked cages, which are of a certain size to allow smaller cations to enter - i.e. the limiting cage sizes are roughly between 3 and 10 angstroms in diameter. 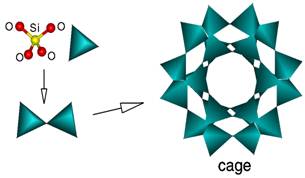 This is due to a very regular structure of the cage’s molecular dimensions. The maximum size of a molecule or cation that can enter the cages of the zeolite is determined by the diameters of the cages. These are conventionally defined by the ring size of the aperture, where, for example, the term ‘8 ring’ refers to a closed loop that is built from 8 tetrahedron coordinated silicon (or aluminium) atoms and 8 oxygen atoms.

These rings are not always perfectly flat and symmetrical due to a variety of effects, including pressures during formation and the strain induced by the bonding between units that are needed to produce the overall structure, or coordination of some of the oxygen atoms of the rings to cations within the structure. Therefore, the cage openings are not always identical in natural zeolites and that gives them their great versatility in dealing with many different molecules. And for this reason, naturally occurring zeolites are often excluded from many important commercial applications where uniformity is essential.

Zeolites are also called ‘molecular sieves’. The term refers to the mineral’s unique ability to selectively sort and absorb molecules based primarily on size. In synthetic zeolites the cages are all exactly the same size and are therefore very good for extracting one or two particular molecules (cations). Natural zeolites have the advantage over synthetic zeolites of having superior crystalline structures with ‘pores’ or ‘cages’ of differing dimensions suitable for many varied purposes. The structure purity of the cages remains unpolluted over time.

Molecular sieves are natural chelators, having the ability to be used as tools for cation exchange. The term chelation [key-lay-shun] means a substance (usually negatively charged) that can attract (electro-chemically bond with) toxic minerals, metals and other materials within the body’s fluids allowing the body to dispose of them naturally.

Having read all of the above, the reader would no doubt be wondering how is it possible that some zeolite products can be advertised as ‘liquid’ zeolite. Well of course anyone can advertise their product the way they want even if the description was not correct. However, if the product really was a liquid, then there would be no cage structure. It is essential to have the cage structure otherwise the zeolite has no way of not only, attracting the positive charged cations (the negative charge derives from the chemical combination.

Go back to previous page